#TeamHandsome wasn’t exactly a “thing” in 1993. If it was, you could bet that Rickk’s fist of solidarity followed by a kiss (one of two kisses in the part) at the end of a flatground barrage would be making the .GIF rounds on Tumblr. Nowadays, it’s perfectly normal for a bunch of “good” skateboarders to spend a session in silence, or for half the kids at the skatepark to have headphones in. EMB’s elaborate celebration during Carroll’s final line in Goldfish looks foreign by comparison. He gives pounds mid-line and picks up a crew towards the end of his five tricks, reminding us that it’s all about friends and fun. (Isn’t the Pretty Sweet intro just a vastly more orchestrated version of this line?) Though Ricky Oyola may lay claim to skateboarding’s most memorable traffic interactions (the ollie into Kennedy Boulevard at Love and the car cut-off backside flip at the start of his Sub Zero part), Lennie might have him beat by literally nollie backside 180ing into a car. Engaging with moving traffic is not very “chill” (neither is Lennie, if the stories are true), but as the *first* Alien Workshop rider who believed he could go through walls, you have to admire his confidence in knowing the car would not be of detriment. 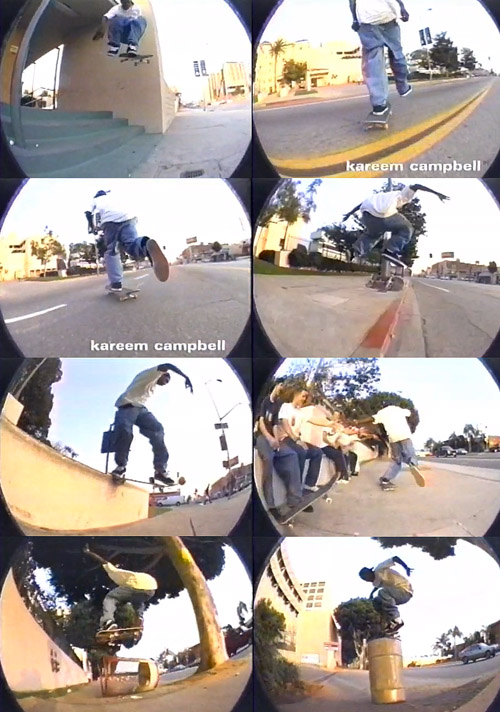 We never found out what was in the suitcase in Pulp Fiction, and we’ll never know who paged Kareem Campbell in Trilogy 20 Shot Sequence. All we know is that it was important enough for him to land the final two tricks in the line on that try. Kareem even went the distance of preserving this oft-discussed mystery by declining Patrick O’Dell the chance to interview him for the Menace Epicly Later’d episodes. As attention spans grow shorter, the seconds used in a video part become more precious. However, in the nineties, it was still reasonable to go out of one’s way for the sake of a mere flatground trick, and thus increase video part runtime. See Billy Valdez skating across a street and through an outdoor cafe to do a 360 flip, or Jeff Pang riding off into the street, switching direction, pushing a few times, and ollieing up a curb for a switch hardflip on flat. To backtrack to Lennie Kirk, near-death experiences belong far from the word “chill.” Except Key’s demeanor after the event in question is perhaps the most nonchalant walk-off in near-death experience history, almost as if he had been there before, and wasn’t the slightest bit bothered. Sheffy’s wrath must have been something to see. His one-foot rollaway after a switch 360 flip off a curb cut could have easily ended in the board becoming two pieces. Instead, he uncharacteristically regained his composure, and popped a lofty switch flip soon after. Skateboarding on car hoods has turned into a #urbanpoints grail of New York web clips — though they have a tough time living up to how relaxed Hamilton Harris looked after riding across one, with his arms tucked behind his back, pushing to kickflip over an Astor Place street grate.

We’ve talked about SAD being able to turn the mundane into magic before. Just how Chauncey Billups is understood to be the sweatiest NBA player, SAD must have been among the most heavily perspiring 90s skaters. His trademark was not a moment, but an entire career spent skating with a towel in hand or in pocket, to a point where any other sweaty individuals — from Frenchmen to Southerners — are paying homage to him over a decade down the line. (Note: The “Best Of” part has more towel footage than the actual “Rookies” segment in 411 #20.) Skateboarding has a convoluted relationship with “trying hard.” Obviously the best skateboarders work hard to be the best, but we’re talking about those who try hard at not looking like they try hard, be it through minimalist spots or strict use of the 5-7 most basic tricks. In less delicate hands, Quim’s nose wallie fakie, half cab over a garbage bag, two consecutive frontside 5050s on essentially the same ledge, and backside flip on flat would come off as a try-hard #summertriptoNY fail. At his helm, it looks incredible.

Stevie was entering the “I’m gonna teach you motherfuckers how to skate flat”-stage of his career when this commercial came out. The crotch grab was the punctuation mark on three of the finest tricks ever done on flatground. This line had no concerns for unwritten codes, choreography or cohesion. It subverted all the rules of constructing a line in the most IDGAF possible, and for that, we love Mike York. There is absolutely no reason for Javier Sarmiento to have insisted on skating MACBA that day; Para-lel is a ten-minute skate from there, and all the other best spots in Europe are a train ride away. But insist he did, while remaining at ease with hundreds of people standing on the spot’s main obstacle as he rattled off a five-trick line, and almost Shawn Powers’d a baby carriage in the process. Like Kareem Campbell after checking his pager, Chewy knew that he had bigger things on his mind than skateboarding. Unlike Kareem Campbell’s forever unknown message, we can all give an educated guess as to what the exchange between Chewy and the backpack-carrying individual was.

The true power of looking cool on skateboard was made known in a clip featuring arguably the two best skaters right now (Busenitz and Puig) at the height of their powers and in #summertriptoNY mode.

Even then, we didn’t remember Busenitz’s monstrous backside 5050 or any tricks into the Courthouse Drop. It was Pete Eldridge that appeared the most natural, in a line that likely began with the filmer asking “Hey Pete, want to film something after you’re done with that cig?” and him responding “No, let’s just do it now.” He was far from the first to skate with a cigarette, but he is the closest skateboard-equivalent of some 1940s movie star smoking in black and white film, and looking undeniably awesome while doing it.

Thanks to Sweet Waste, Jack Sabback, Chops from Chrome Ball and Jason from Frozen In Carbonite for their encyclopedic knowledge of skate minutiae and assistance in compiling this list.