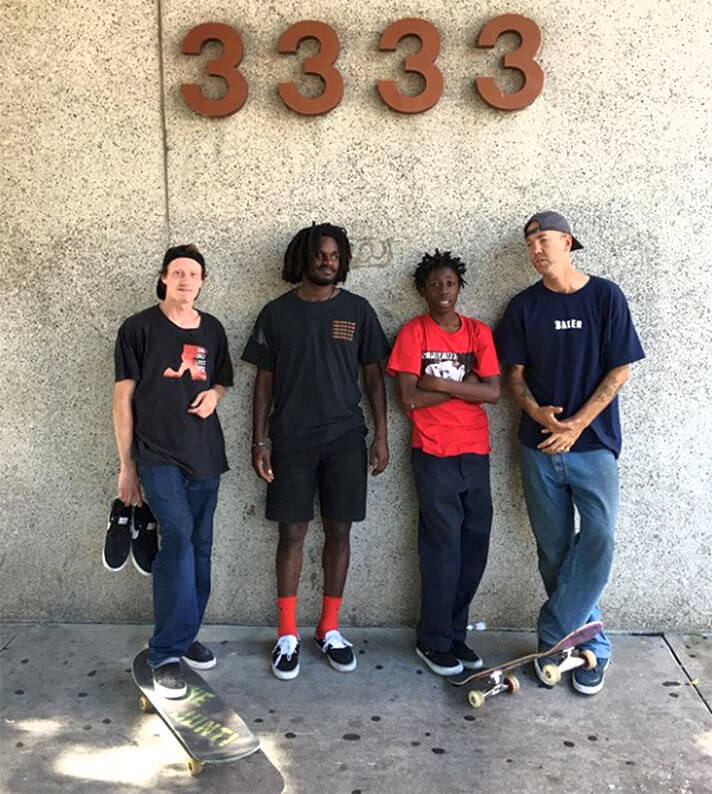 Reynolds has been around a lot of skateboarding and is responsible for putting some of the best of it into the world, be it with his own parts or anyone on his companies. Just a few months out from the release of Baker 4, we hit him up to see what has stuck out for him over the years and what might influence his own videos.

I was young when this part came out, but I could tell he had power. In the beginning he says, “I’m Sean Sheffey and I’m 17 years old,” — but he’s a giant! He was way ahead of everybody; cab over a picnic table, sliding double-kinked rails. I don’t think at the time anyone was doing that stuff. He was treating that double-kinked rail like a flatbar. When the song picks up he does all these cool curb tricks — the cab back lip to 5-0 grind. You can tell there was no wax, it just screeches along. Another part I like — he tries to do a fakie ollie nose manny on a curb but halfway through he sets the board down and turns around — doing whatever is in front of him. I love that.

I saw him the other day! I see him a lot. He rides his bike like 50 miles a day. And he still rides that little board — a 7.75 with little wheels.

I noticed something: all the parts I picked are of huge characters. A basic video part is never really going to get my attention for too long. One I really like, and I’m sure it’s been mentioned before (Ed. Note: It hasn’t!), is Lennie Kirk’s part in Timecode.

I love when he’s preaching in the beginning all blurry, it was so weird. I know him a little bit — something in his mind was telling him he had to follow the lord, but I’d also hear that he was on drugs, stealing cars and stuff. That made me want to know more! The idea that he was that out there and doing that skating was really big for me. He does a 5050 down the side of a parking garage and hits the kink and flips his feet out and bangs his head, but then gets back up and does the whole thing. He’s in this little low ball 5050ing such a long hard thing. In one clip, he’d be skating in cornrows, and in the next he’s in a suit with a Bible, sitting in a chair. I had no idea what the hell was happening.

I was battling between Welcome to Hell and Misled Youth, but this morning I watched Misled Youth, and for me that was a big inspiration. Besides Pat Duffy, before that people would kind of put their footage in a video to a song. There wasn’t that much drama behind it, you know what I mean? When I saw that, I wanted a part like that! I want a part that makes you hyped. That was a big inspiration to the way I learned to edit and make parts. We used a lot of editing like that in the first Baker video, because I learned it from Jamie: double angles, slo-mo, more tricks after the part is over with no music, and editing really hard on the beats of the songs. I feel like a lot of that was him, you know?

Man, there’s these parts where the tricks are just coming at you! And he’s flying off everything — there’s no little trick in the part. This one is totally different than, say, the Lennie Kirk part because Lennie was not trying to film a video part. He was out skating and someone happened to catch him on film whenever they could. Jamie’s was very, very structured — like this is the trick I need in this part of the song and these are the clothes I’m going to wear. I like both ways of doing it.

Are you editing Baker 4?

Yeah. I don’t really like editing is the problem, but it’s kind of like raising a kid: you have to. You don’t really have a choice. I can’t trust anyone else to make it the way I want. Sitting at the computer and going through footage is really not my favorite thing, but I’m going to do it. Baker’s been around for 20 years, so there have been years when I’ve been more involved than others, but there have been times when I let other people do stuff, even for Instagram, and I hate it. I only like the stuff I sat and made myself. This video is a whole different thing with all the older guys and a lot of new ones. I gotta make it right. The footage is sick and it’s got a lot of funny moments.

November. That’s the word. So I’m gonna try and wrap it up by then. It never ends.

Jim gonna be in it?

I hope Jim has a few tricks in, like, a Deathwish section in Baker 4.

In 2000, punk had left skateboarding almost completely, but Jim really kept it going. For years after that, we would see kids with leather jackets trying to look like him. He saw the song “Gloria” being used in a fight scene in some movie (Ed. Note: It’s in The Outsiders), and wanted it in his part. As soon as he showed me that song, I thought it was perfect. It was fun to watch him really go after it, and make a memorable part.

He was really dedicated to making it a certain way. We were skating together all the time and I sat there and edited the video with him, so I watched it as it was happening. When he’s gotta go back lip the 15 at Wilshire or back noseblunt a rail, it’s not a small task for him. He’s gotta go learn it and he’s gonna talk about it for a while — it’s a big thing. That’s Jim. (This one isn’t online, so you’ll have to buy it.)

I’m still a fan of all skate videos – I watch everything, so I gotta give it to Tyshawn in “BLESSED.” I love when that Bob Dylan song comes on — I wonder if he knows about Bob Dylan — I feel like that was all Bill. I’m not that close with either of those guys, I’ll talk with them or whatever when I see them, but whatever has happened between Bill and him meeting each other has been a great thing for the both of them and for skateboarding. That’s what you hope for as somebody coming up. I can see the teamwork in the skating. I heard they went back ten times to get that backslide flip up the wheelchair ramp! It’s that Jamie Thomas mentality. You’re not gonna give up: you keep going back and back to get your trick and put out a part you’re going to be proud of.

I’m not a big “hater” type, but a lot of skating right now is kind of whatever, you know what I mean? To see him go and huck himself and really try to get his video part is impressive, and I respect it a lot. When I saw it — Jake Phelps was alive at the time — I called him, and was like “This is the kid.” I remember people were arguing that he only had that one video part [after he won S.O.T.Y] and blah blah blah, but it shouldn’t matter. That’s enough. There hasn’t been a part like this. That was a big part. I miss people really thinking about their part and how it’s going to represent them. It’s what everyone is going to see as them even after they’re gone.

You shouldn’t hand over your footage to someone and say “make whatever” — I think it should be more than that.