From an issue of Skateboarder. Mid 2000s-ish. 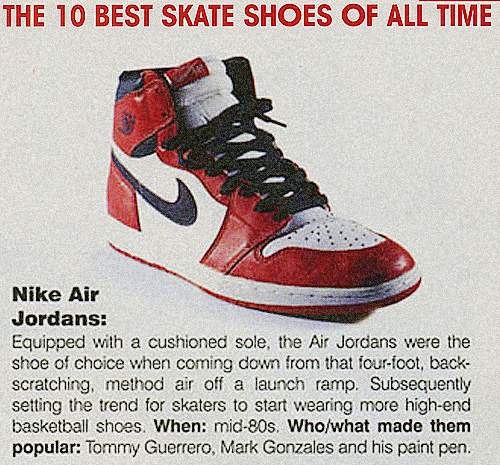 At a time when the dress code prohibited non black and white shoes, the original Jordans were initially banned from the NBA. The Bones Brigade seemed to dig them, though. Do you think those guys got into debates about whether they were still “core” for skating in basketball shoes? If not, do you think they would have if the Slap message board was around in 1986? The black/royal blue colorway Lance Mountain is wearing below is the one they chose to retro for Jordan’s 50th birthday. It’s coming out this Saturday, which means there should be a line forming in front of the Foot Locker on 34th Street in the next 24 hours. Related violence TBD. No clue what “Mark Gonzales and his paint pen” is in reference to (See Skateboarder blurb above), obviously because it has to do with art. Anyone? Do you think a guy who put a “23” on his pro model Etnies shoe, started a company called 23, and had a picture of a XV on a deck was inspired by Jordan? Ronnie Bertino, Ray Barbee, Jason Dill, Clyde Singleton and a lot of notable nineties-era footwear, including a pair of XIIIs. Menace, given the crew’s penchant for #urban fashions of the era, was instrumental in progressing the use of non-Jordan I models in skateboarding. Notable Quartersnacks associate, Alexander Mosley, has also been a known advocate of skating non-Jordan I releases in the modern era. Somewhere, there is a photo of Billy Rohan doing a blunt stall in the same Jordan IVs. Except his were fake. A great look with ankle monitors. And this is just all around awesome: Naturally, most of these scans have been lifted from The Chrome Ball Incident.