Did anyone even skate down there at that time?

Not really. The first time I ever skated Love was in 2005. There was a rumor that you could skate there on weekends. I went and there were 50 people skating. Chris Cole and a bunch of pros were there. The cops came within an hour. It wasn’t until 2008 that you could skate there again — just barging it. I don’t know why it mellowed out all of a sudden, on weekends at least.

How did that place have it’s “rebirth?”

I think it it was simply because people started trying. I’m sure there were times when cops weren’t there in years before, but no one tried. You’d see a cop and figure he’s there 24 hours.

He’d go to lunch and you can get an hour, and sometimes there wouldn’t be a cop there for an entire weekend. You just had to try.

What exactly is Sabotage? Is it a crew, a video series?

I’m not really sure how to explain what it is. I didn’t start it. My friend Ryan Higgins started it. He was psyched on graffiti and skating. Sabotage 1 has nothing to do with what it would become. It almost doesn’t exist to us anymore.

We kind of re-did it by putting our old skate footage from the time in it, and made a “Trilogy Tape” of the three videos. It’s like a 25-minute version of the first one. It’s more a video of crazy shit than a skate video.

The second one was where I jumped in with him and we collaborated. It was a skate video with a graffiti section. It became a good combo. That’s where everything started.

It seemed like it really picked up by the third one. Philly was becoming a big city for skateboarding again — when Suciu and Ishod moved there.

You need someone like that to promote the spot to get it attention. No one is gonna see it if it’s just me and my friends skating there. It blew up again with those dudes having parts.

Were you surprised how big of a response that video got?

Yeah, it was definitely because of those two guys, but I’m glad some of the other dudes got some shine out of it too.

Love seems like it is pretty run down now. Do you guys ever fix it up or bring a D.I.Y. vibe to it?

The place is falling apart. Tiles are sinking. You have to pick them up and put rocks and coins under them so the corners even out.

We had a mission with the planter in front of the three. It had to be dug out, then two people carried it across the street to this building with a dumpster that was surrounded by cameras, and threw it in there. Once it was gone, there was a big hole in the ground, so we slid tiles over it. The city actually cemented over the hole and did a good job with it, so you can fully skate it now.

How did the Municipal Building become the second spot to Love, kind of how City Hall used to be? Before, you’d be lucky to get five minutes there.

I skate there almost every day now. Same thing: we just started trying. The original security guards who took their jobs super seriously changed jobs — there’s only one crazy dude left who blows his whistle at us. The new ones aren’t dudes who have been protecting the building for ten years and taking it super seriously.

I think that spot might become legal one day. There’s a new mayor that will probably get elected and he seems pretty hyped on skating.

Do you guys ever go to Paine’s Park? I always wondered if there were two sects of skaters in Philly now: the people who skate downtown and the people who only go to the park.

I don’t. If you want to skate tranny, that park is sick. All I want is a ledge and flatground. The ledges at Paine’s are from Love and City Hall, so they’re perfect, but it’s on a hill and you get razor tail from the ground, which is a little worse than average skatepark ground. I can make a board last forever just skating marble ground downtown.

But that’s where skateboarding seems to be heading. We’ll make little jokes about going to Paine’s Park, but nothing that serious.

Is the rumor about Love getting torn down real?

It’s true, but it has gotten pushed back so many times. I think next year is finally it. Love is supposed to go under construction next spring or summer. It seems like they’re gonna clear the whole park off, keep the foundation, but make it all flat. There aren’t going to be any walls. They just re-did City Hall and it’s flat. I guess it keeps crime down because people can’t hide anywhere. I have seen the plans and it looks nothing like the original park.

There’s only a small window where people can skate the gap, right? Are people throwing claimers for when the fountain is emptied this winter since it may be the last time ever?

I’m sure people will come from all over the place to try things this year. When it’s too cold, the bottom turns to ice. They also have a Christmas Village there, which runs from the end of November until New Years. The run-up is gone and the landing is pretty much gone. After New Years is the only time you can really skate it, but by then, it’s snowy. It’s a really small window.

Did you try to switch anything up for Sabotage 4?

We branched out a bit. I went to Madrid to film with my homie Juan Algora and he came here, so his footage will be half Spain, half Philly. I’d also travel to L.A. a bit, and ended up getting a whole Kalis part.

How’d you link with Kalis?

I met him because we have Love Park in common. We met at J. Kwon. He told me he was going to Chicago and that we should meet there to film — not planning on having a part or anything. I ended up driving out there and that started it.

Is there anyone else who’s synonymous with that era who you’ve been able to link with?

I got some last minute footage of Kevin Taylor. I’m trying to get a super last minute clip with Damien Smith. A lot of the O.G. dudes are still around. Jaesun still skates Love all the time. That’s the dude who did the fakie inward heel over the can in Stevie’s Chocolate Tour part. 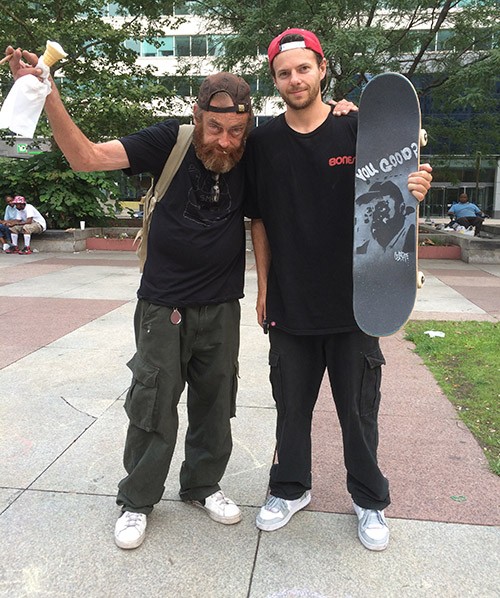 Is there still a bunch of crazy shit going down at Love with the lurkers?

One of our little homeless buddies actually passed away the other day. It was this guy who drank mouthwash every day. The mouthwash was only $1 and it was 27% alcohol. Everyone was hyped on that dude, he was so funny. I’m not entirely sure it’s true, but we haven’t seen him in a while and that’s the word.

Every day there’s something over there. You could write a book on the people who hang out there.

The cops don’t hassle any of them?

It’s a lawless park — besides the skating. It’s scary how lawless it is. Sourbeer said something to the cops one time on the way out, like “Why are you hassling us with all this other crazy shit going on?” There’s never a response beyond “I’m here because my sergeant told me to kick you out.”

Some of the bike cops will take it so personally. They’ll chase you for ten blocks, into parking garages, all sorts of shit. Once they chase you on a straightaway, they pretty much already caught you. It’s best to run up some stairs so you can keep a lookout for when it mellows out. If they catch you there, then the best thing is to just skate back through Love.