Whether you’re looking for convenience, are drunk or just a derelict, Citibikes changed some facet of your life this year. This includes things pertinent to skateboarding, as docking stations became an opportunity for novel skate spots (above), regular skate spots were re-appropriated into Citibike spots, and taking the bridge to skate Brooklyn got a lot quicker.

Shout out to the stolen Citibike that got left at Tompkins and 12th & A for an entire weekend this summer, and to whoever got stuck with that bill. 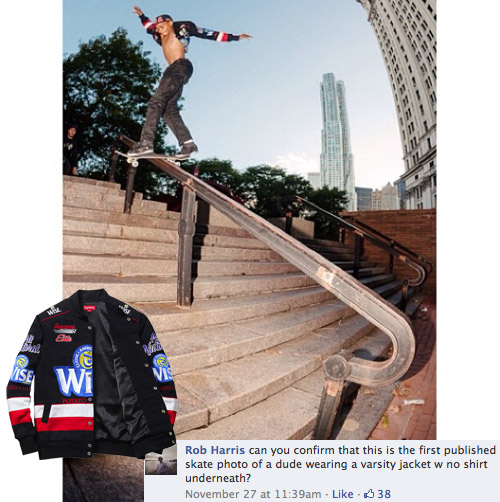 The Piss Drunx wore out any novelty there was to be had in draping one’s bare torso with a leather beer rag, and jumping down a set of stairs. So, it came as a shock that Tyshawn Jones flipped the shirtless jacket combo on its head, by utilizing a racing jacket for his handrail maneuver. The trick is equally an update, a homage and a remix. (Especially considering rocker points aren’t even a thing anymore, unless you’re trying to get into Cabin at 3 A.M. to meet some girl who loves pills.) It also stands as the most important fashion move by a skater under the age of sixteen in recent history. Beyond benchmark first “official” parts from Akira and Rob Campbell, and first-part-in-a-long-time parts from Leo Gutman and German Nieves, Jeremy Elkin’s Brodies video hit an unexpected benchmark by featuring the first-ever video part filmed ENTIRELY in sweatpants and sweatshorts. The office favorite would have to be the Gold Wheels faux-Gucci sweats. Conversations about the differences between New York and L.A. are endless:
“Fool, I get way more space for the rent I pay.”
“Yo, but I don’t have to own a car, b.”
“Fool, the weather…”
“Yo, but I like seasons because I can focus on art and Netflix in the winter, b.”
“Fool, every pretty All-American blonde girl in the country moves here to have her dreams crushed when she finds out she won’t be the next Taylor Swift.”
“Yo, but I like Dominican girls anyway, b.”
“Fool, the schoolyards.”
“Yo, the T.F., b.”‘
Etc, etc, etc.

However, if there is one aspect of living in Los Angeles that New Yorkers have always embraced (aside from Sand Gaps), it’s In-N-Out. The “first thing off the plane” Instagram shot of an In-N-Out burger is old at this point.

Leave it up to Eric Koston — a prominent Los Angeles skateboarder who skated to the most excessively on-the-nose song about Los Angeles ever made — to proclaim what “unbiased” food critics have recently began contending…that New York’s Shake Shack is better than Los Angeles’ In-N-Out. 5. T.F. West
4. Reggaeton Ledges. This spot sucks, but you can’t help but admire its ability to trap people into thinking it’s good day after day. There is also a theory that people who live nearby are being paid under the table by the owners of Commodore to entice their Manhattan friends into coming here (“Take a Citibike over”), knowing they’ll end up at their bar after leaving this spot.
3. The re-opened foot-high ledge at Columbus Circle. Only bust-free spot in midtown?
2. The metal trash can nipple at T.F.
1. Virtual Reality Bump