Blackout was a video released by Satva Leung in 2001 or 2002 as a promotional piece for his of-the-time venture, Judah Skateboards. Much like Zoo York’s E.S.T. series, it is an assortment of montages split up by region, and provides a nostalgic look back at what New York skateboarding looked like ten years ago, before the internet changed everything, and kids got significantly better. (Here’s the photographic edition of “Ten Years Ago,” in case you missed it.)

Instrumental boops and bleeps have slowly become an outdated safety-zone for soundtracks in east coast skate videos. They had a stronghold on song choices in the beginning of the file sharing era, as they provided original music when record companies were looking for new candidates to sue for copyright infringement after their business model collapsed. Today’s standard seems to be bands from Brooklyn and Baltimore.

With the remodeling of the spot formerly known as Chinatown Ledges, and the demise of the big banks, we have lost the two dirtiest spots in New York (as rightfully pointed out in a Skateboarder article.) The Fat Kid spot might lay claim to that title today, but we’re open to alternatives for picking up strange diseases and rashes after falling.

Dag Park is an oft-forgotten entry on the “Spots I wish were still here” list. The best ledges / best ground combo in the city that you didn’t get kicked out of, circa 2000-2001.

Even though it hasn’t been nearly as long, the [spot across from] Javitz Center is missed, too.

People who move to New York with skateboarding largely in mind, but gradually lose interest (at least in actually skating New York, if not skateboarding altogether) in exchange for potentially lucrative art careers are not a new phenomenon by any means. The Muska has been on that program for quite some time.

Even though Dave Mayhew is disregarded by historians on the basis of his participation in The Storm, he has one of the best tricks ever done at the Banks. (Seriously, bikers are the only ones who ever launched off the big banks, and he backside flipped off of them…over a police barrier, i.e. he figured out how to treat the big banks like the small banks, pre-fence installation.) He was also ahead of the curve in doing impossibles out of tricks. Carroll had to step up and make it more legitimate, though.

Westchester spots look a lot like midwestern spots. Aside from Sue’s Rendezvous. That spot looks like it’s in Atlanta.

Remember when people who mostly skated Manhattan found out that there were a lot of recycled plastic benches out in Brooklyn?

The Flushing grate maintains to be one of the few New York skate spots where all of the best tricks have been done by locals. (For an internationally known spot, “local” means the tri-state area.) So other regions were never up for the title. James Reres will probably hold it for a while longer.

Anthony Correa would make a great Chrome Ball Incident post. The Zoo ad of the nollie half-cab crook revert at the Houston ledge has always been a favorite.

Blackout was the last video with enough foresight for future legends to give Geo “TOMA!” Moya the ender.

Continue reading for the montages of the other cities, just don’t expect anything great, as this video is being discussed for historical/archival reasons, not because it is exceptional in any way.

Wooh Da Kid (“All my white friends say Wooh Da Kid is rad! YES!”) actually made a significantly better Blackout recently. As there are probably ten non-disintergrated copies of this left on VHS throughout the planet, thanks goes to the original uploader.

END_OF_DOCUMENT_TOKEN_TO_BE_REPLACED 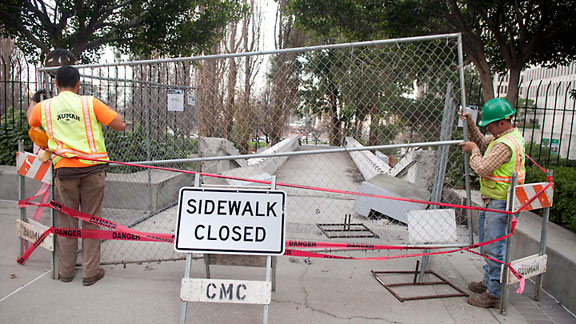 Not in a getting skatestopped way, either. Because it looks like city workers are completely tearing the ledges out. How many classic (American) street spots are still left? Pulaski and what else?

Kind of bummed to have never gone to San Francisco and seen (obviously not skated) it. And a handful of other SF spots that aren’t there anymore.

END_OF_DOCUMENT_TOKEN_TO_BE_REPLACED This is pretty much the realest thing on the internet right now. Enough to make anyone want to go wild in the streets even though it’s going to be below freezing tonight. This was crucial to driving from D.C. to Charlotte in record time this past December as well.

It snowed again. With one more inch, we’re en route to having one of the snowiest Januarys on record.

Although mentioned in previous posts, we have had a few chances to actually skate the Below the Bridge Skatepark in Bayonne over the past several weeks, as it has been the only real source of non-weather dependent terrain, aside from maybe a fun box in an office. The park isn’t that big, but they maximized on what space they had. The normal protocol here has been that the people who only skate ledges stick to the left side of the park, and everyone else skating the stairs, bowl-half and euro gaps stick to the right side. It does tend to get crowded in the evenings, but is pretty much clear at any time you expect kids to be in school, and weekday nights have never been too much of a hassle in terms of overcrowding.

The ledge is really solid. If it was in Brooklyn or Tribeca on decent ground, it’d be one of the best ledges in the city, so you’re not really settling for merely a box with some Home Depot angle iron glued on. There’s not much here in the realm of transition beyond the half of a bowl, which some kids treat as a mini ramp, and a three-foot-high quarter pipe at the top of the stair platform. (There has been talk about building a bowl or a mini ramp in the space next door though.)

The park has already been responsible for some new Zipcar accounts, so it’s definitely worth venturing out to a few times over the winter. They have three sessions: 12-3 P.M., 3-6 P.M., and 6-9 P.M. (There actually might be a 9-12 on Fridays and Saturdays.) Each session is $15. Located at 9 Gertrude Street in Bayonne. (Ten to fifteen minutes via Holland Tunnel when there’s no traffic. 25-minute to three-hour drive when there is traffic.)

Both of the pictures are enlargeable. Yes, there’s a weird ghosting thing because they were taken with a cell phone and not a real camera. I was gonna post some footage of Andre Page doing ollies onto absurd things, but there might actually be a half-indoor winter clip on the horizon to relay the largely undocumented face of New York skateboarding in the wintertime.